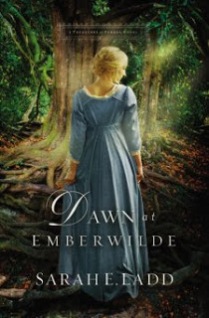 Sarah E. Ladd is my new favorite author! She captured my heart with The Curiosity Keeper and I was incredibly excited to read the next installment of the Treasures of Surrey Novels. Although they are connected, you could absolutely read this as a standalone novel. (But really, go back and read The Curiosity Keeper! It’s great!)

The novel opens with a young woman and her half-sister being swept away from the simply life they know at an all girls boarding school into a life of ease and luxury…or so they think. The preparatory school where they live was created for young girls without means to learn how to provide for themselves through jobs such as being a governess. The heroine, Isabel, had been trained as such and was a teacher in training before her world was turned upside down. Her younger half-sister went from being in a school that would prepare her to be a governess to being given one herself! The change for both girls is not easy, but they are left with no choice as their current situation at the boarding school is not intended for young women of privilege.

As the story progresses Isabel discovers all is not as it seems with her aunt and uncle. She must also learn to discern the character of two young men who have indicated an interest in her well-being. One young man is encouraged by her uncle, the other by her aunt. Both are charming and handsome, but one is not as noble as he seems. (You’ll have to read to find out which!)

Isabel also discovers there is some mystery surround the death of her mother and what she had been told all her life may not be exactly the truth.

You will find yourself captivated as I was as you read. It was very hard to put this down and actually go to sleep at night! The intrigue and suspense in this regency era novel will keep you turning pages.

Disclaimer: I received this novel in exchange for my honest review. All opinions are my own. I was not required to write a positive review.