Skip to content
November 15, 2015 Grace-Filled Writer
I have thoroughly enjoyed getting to know Shelley Gray as an author. She is not new to the Christian fiction scene, but she is new to me. I am not typically a mystery fan unless it involves a historical Christian novel. I was very excited to have the opportunity to read and review the entire Chicago World’s Fair Mystery series through BookLook Bloggers. 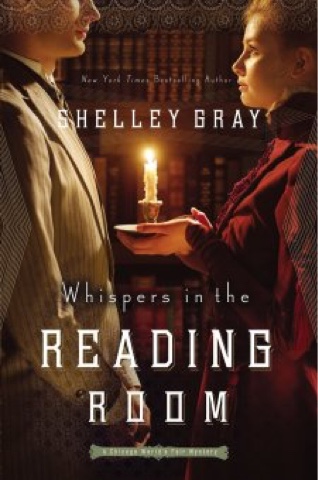 This entire series has been engaging from start to finish. I have very little time to read for pleasure even though it is something I love to do, so when I do read I like quality stories that leave me feeling as if I know the characters personally. Overall this series has provided that satisfaction.
This particular novel involves an unlikely pairing between a wealthy nare-do-well and a young woman who had fallen from society’s graces due to her father’s lack of provision after his death. Lydia is the female protagonist who appears rather naive despite her high intelligence. Her mother’s indifference to her in general and her own seclusion in the library where she works creates a hopelessly romantic personality that is equally separated from reality. Her station in society has spared her from some of the harshest realities of life, but through her own misguided curiosity she finds herself embroiled in a murder investigation as a potential suspect.
The male protagonist, Sebastian, was not a very likeable character for me at the beginning, but he did grow on me as the story progressed.  His arrogant nature and demanding ways do not present him as a hero. However, his growing desire to become an honorable man does redeem him in the end.
The fast pace nature of the story kept me on the edge of my seat, more so than the other novels in the series. While a sign of a good book is always wanting to read more, this was probably my least favorite for a few reasons. I do like a good redemption story, but in some ways that portion fell flat. The only reason Sebastian seems to want to change is because of Lydia and not a convincingly true change of heart. I also felt Lydia’s naivety made her less likable and her growth during the story felt less than sincere or realistic.
The other area I felt was slightly lacking was spiritual growth of the characters. Now, I am not one who likes a preachy novel. Some very successful Christian authors sometimes fill their pages with full sermons and I have never been a fan of this. At the same time I like a story with true redemption reflective of a heart changed for Christ and this never entered the picture, which is why I think I did not feel the character’s changes were completely sincere.
I would still recommend this novel and the entire series but I personally think the first two books are more enjoyable than the third.
Disclaimer: I received Whispers in the Reading Room as part of the BookLook Bloggers review team. I was not required to write a positive review. I was not compensated in any other way.

2 thoughts on “Whipsers in the Reading Room: A BookLook Blogger Review”

My girls on the court, doing what they love!
Still in our jammies, we finished up our puzzle this morning 🧩😊🧩
We were running a bit late as we headed out to Grace and Beth's science class because of ice on the windshield which I couldn't get to scrape off. While we waited on the the front windshield to defrost, we enjoyed pausing to look at the intricate details of these little guys on the side windows.
Back at it this morning!
So long FL! We enjoyed your sunshine! 😎
Watching one of my favorites 🥰